I have found the recent development of “Deep Style” to be an endlessly fascinating way to mix and match visual ideas.  The algorithm used by the developers of PikazoApp is particularly useful, as it does the best job of emulating the style chosen by the end user.

After running a portrait through Deep Style using a page of illustration & text, I was struck with how the characters were transformed into a seemingly foreign script.

I decided to deepstyle a picture of clouds against a page of plain “greeking” in the Arial font, and was pleased to see that it resulted in a page of “pseudoscript” that, while resembling elements of the Thai, Georgian and Sanskrit alphabets, was completely unique.

I brought the image into illustrator, and traced the characters that were most consistent with Arial’s proportions.

These characters were then imported into “Font Creator” to create an alien alphabet. I figured such fonts would come in handy for game development, or general design. 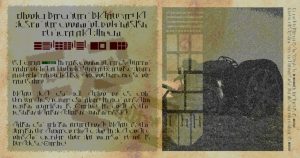 I repeated the process using a Germanic “blackletter” font.

Personally, I believe DeepStyle has the potential to be one of the most significant advances in artificial intelligence “creativity” ever devised.

The fonts are available here:

DeepClassical (TTF)
(Upper and lower case, punctuation, and primitive numbers.)
DeepBlackletter (TTF)
(VERY simple, with 26 characters, and essential english punctuation- no numeric characters have been created, as of 1/27/16)