The story – a mix of science fiction, alternative history, and mystery – unfolds from the perspective of the nine cats who call the island home, when they wake up to find their human companions gone.

“Peace Island” will be (as the name might imply,) a non-violent interactive story which will focus on discovery, atmosphere, and exploration, rather than combat.  The player will have the opportunity to experience multiple divergent storylines, as they approach the ultimate decision:

“Are the humans worth bringing back?”

“Peace Island” will be (as the name might imply,) a non-violent interactive story which will focus on discovery, atmosphere, and exploration, rather than combat.  The player will have the opportunity to experience multiple divergent storylines, as they approach the ultimate decision:

“Are the humans worth bringing back?”

At the start of the game, the world’s your CheezBurger – relax in the sun, explore – but be sure to keep your stomach filled! 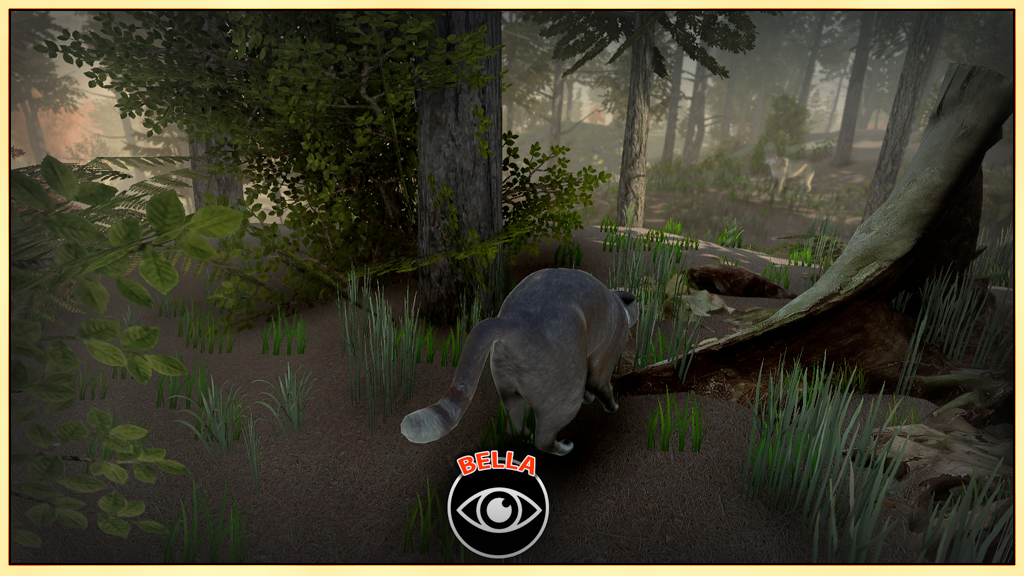 Some of the other animals you meet on the island might not be as welcoming as you would like- gain their confidence to unlock new side quests, and ensure safe passage through their lands.

There’s an invasive, destructive species on the island that needs to be contained, but also just might be the key to everyone’s survival.

Gain entrance to dozens of buildings, to uncover the secrets of Peace Island.  Some buildings are easier to get into, than others.

There are dozens of unique, hand-crafted interiors, loaded with detail, side quests, and clues that might help you along the way. 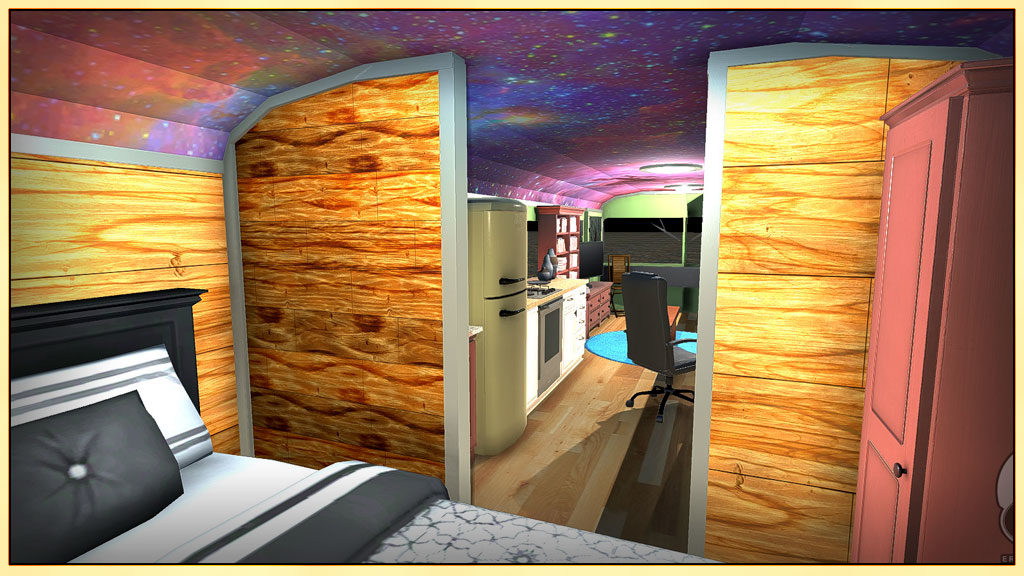 A huge persistent game world so teeming with life and important stuff to do, you have no need of, nor interest in Fast Travel.

The secrets of the humans, through the documents and artifacts left behind. A unique, alternate-history timeline covering over 200 years. 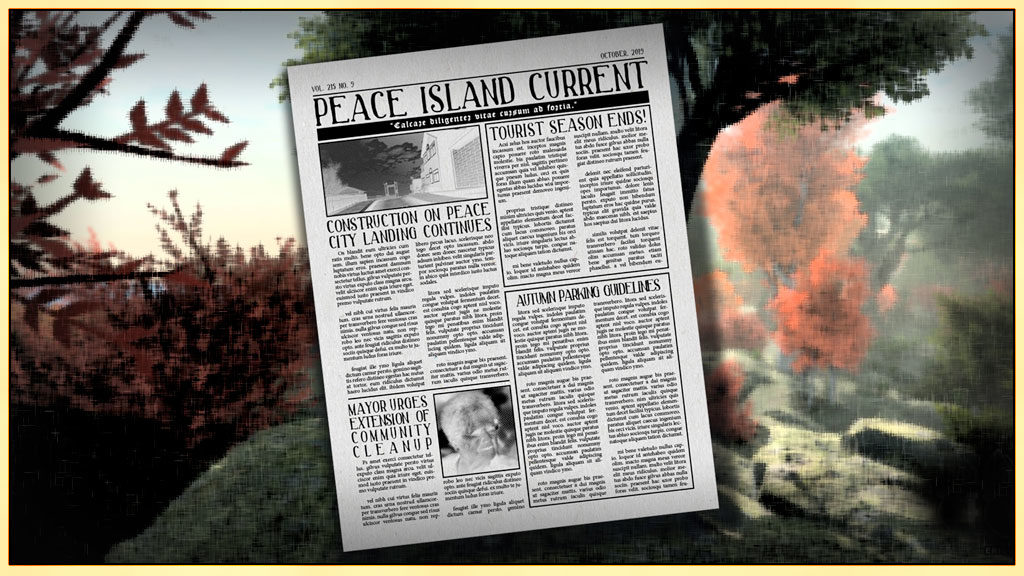 Gain the confidence of the other animals on Peace Island – it’s good to have friends, in tough times.

All nine cats must work together to secure a future for themselves, and their world.

Peace Island is also a personal homage to the beauty of Maine Islands, and to the cats who I have been lucky enough to meet and share my life with.

Elizabeth hasn’t had the best of days.

It began with being gently shoved into the big plastic box that usually meant a trip to the doctor. She made her opinion about the situation well known as she was carried away. 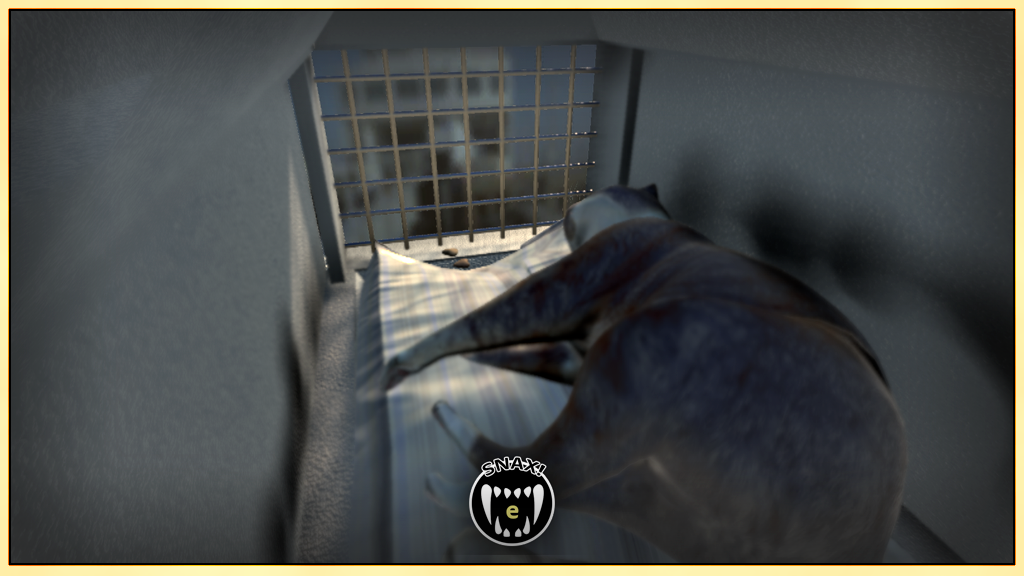 The anticipated pokes and prods never materialized, thankfully enough, but it was loud, and bright, and noisy outside of her tiny confines. Fortunately, the box was lined with her favorite blanket. Her occasional protestations were met with a steady stream of reassuring murmurs, and generous treats shoved in-between the shiny bars of her temporary prison.

The ever-changing tableau of alien color and shape outside faded as a grudging sleep overcame her. She was with her human, after all. As long as they were together, she knew she was safe.

When she awoke some time later, the door to her cage was open. Any fear of the unfamiliar was banished, when she caught the scent of fresh food, just beyond her confines. Yet- the apartment she finds herself in is silent. 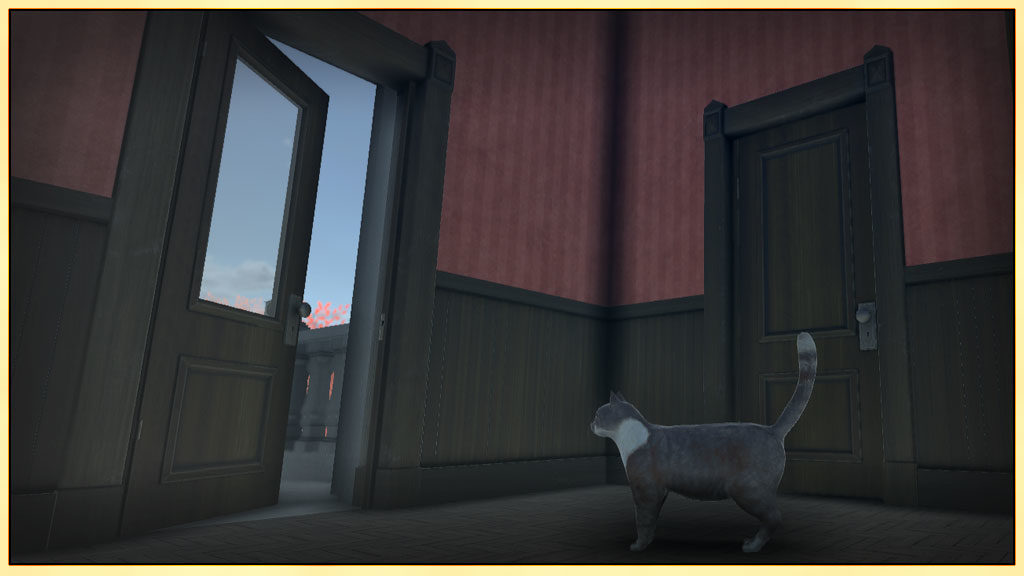 Her human is nowhere to be found, and the unfamiliar sight of an open door beckons. She would rather stay inside, but she can hear the cries of one of her kind, just outside.

Thus begins the story of “Peace Island.” A mix of Science Fiction, Alternate History, and Mystery.

As Elizabeth emerges into the world beyond, she learns about her new home, the other cats on the island, and the now-departed human residents. 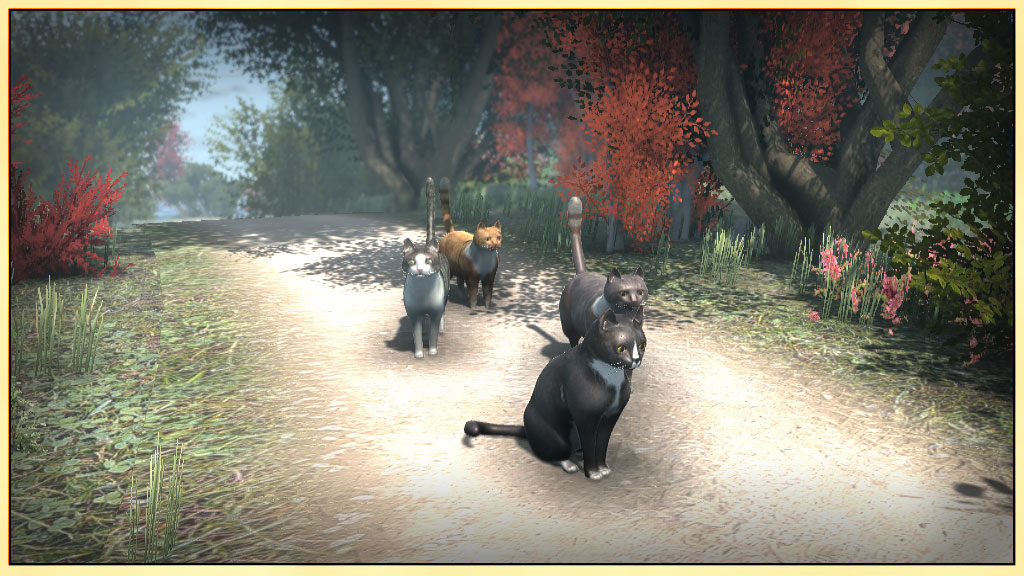 Her journey will take her and her companions to the furthest reaches of the island, as they work to ensure their own survival, and decide the fate of humanity itself. 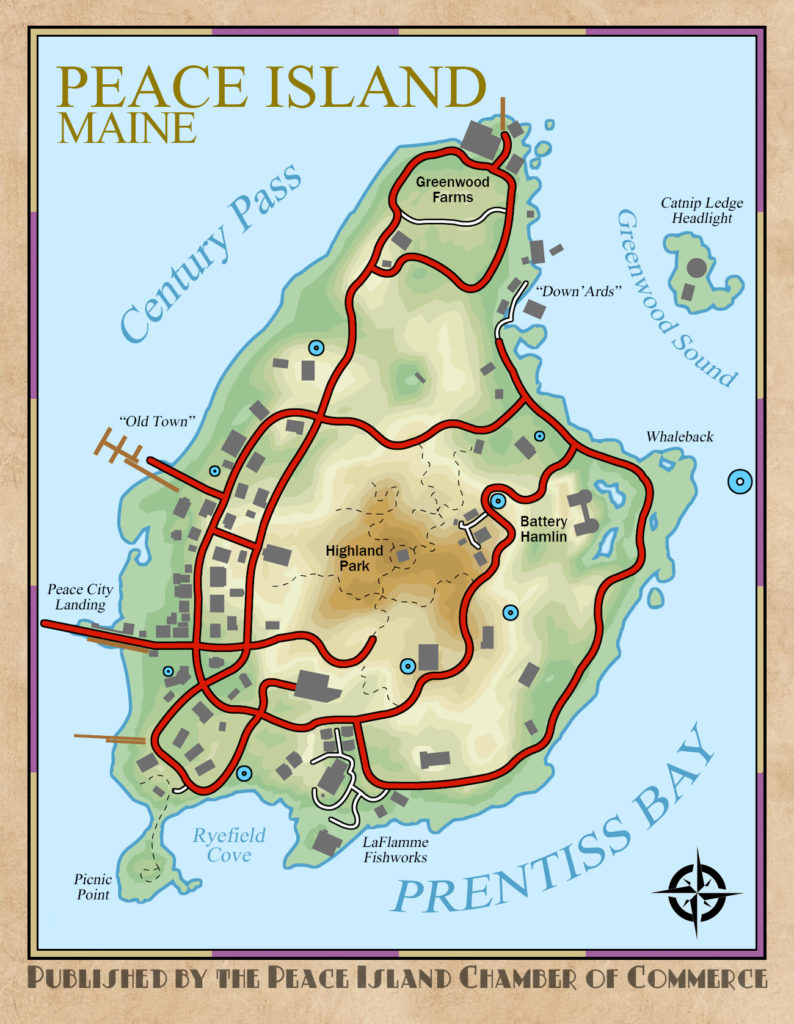 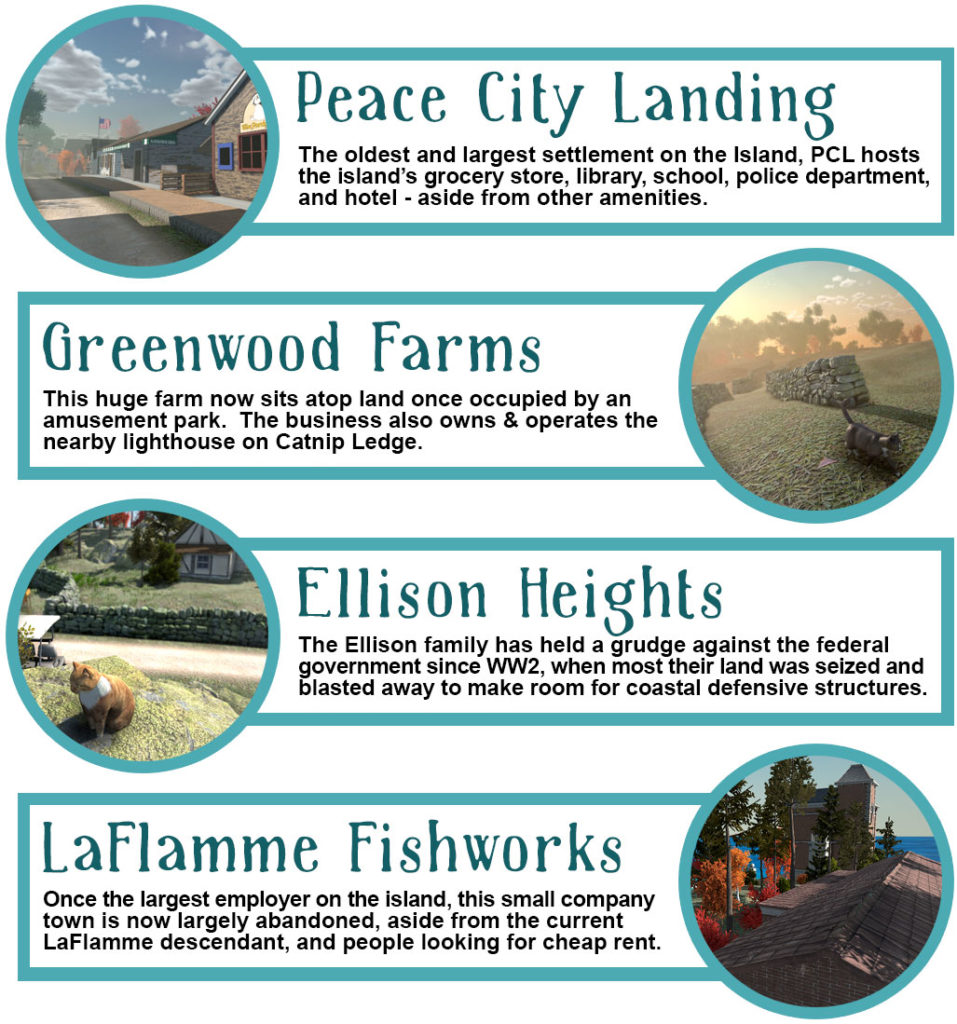 The vast majority of the island’s 50-plus structures will be accessible, as well – including homes, studios, offices, abandoned factories, victorian-era mansions, and no less than three museums.

There is a local public radio station, as well as a newspaper that served the Island’s erstwhile 38 year-round residents.

Care is being taken to accurately depict the architecture and atmosphere that is unique to island life in Maine- right down to the schoolhouse (Inspired by the Cliff Island schoolhouse- one of the few remaining one-room schools in the United States.)

Emphasis is being placed on aesthetics- Peace Island will be a place you will want to visit time and again!

Over the course of the game, the player will take control of each of the nine cats who call Peace Island home. Each has their own unique personality, strengths, weaknesses, and their own role to play.

Once a cat has been unlocked, the player can return to him/her at will, or as the story requires.

HARDCOREGAMER.COM:  “All the people are gone, which might be a serious problem for dogs but merely a point of interest for the average cat.”

WSCH-TV:“Maine-developed video game is based on Peaks Island”

BANGOR DAILY NEWS: “…A paradigm buster, one that eschews the common rock-em-sock-em combat play in favor of “discovery … and exploration.”

AUTOMATON.AM: “Ask(s) an animal’s view about how a pet and a person should be”

WCYY: “Maine has been a popular setting in books, movies and television shows, it hasn’t exactly been a hotspot for video games. But a Redditor took to sharing some screenshots of a game they are creating, and it looks absolutely sick.“

As you can see, the reception has been universally positive – I believe this indicates that there’s a very good future audience for Peace Island.